Your night at the Red Sands resort was not a particularly calm experience; desert nights are very windy and you were glad the tent stayed attached to the 4x4's roof after the beating it received. The camp was a lovely place to visit with it's bee-filled pool, playful monkey families, and fluffy-tailed squirrels, but it was time to make a move along the ribbed red roads to Augrabie Falls. You made a food supplies and hat-buying stop in a (less slummy) town on the way where local kids asked to watch the car for money. Just them asking made you feel a little unsure if things were safe there. On the way out of town you saw the greatest coincidental sign placement ever: Progress -> Stop. Not everyone was happy you requested to make another loop on the town to get the photo, hehe. You later wondered how the 4x4's bald tyres with gashes in side were holding up.

In your first few days in Africa you had primarily driven through dry open deserts, so it was a surprise when belts of green vineyards sprang up. You thought they must be sucking the Orange River dry to irrigate the several thousand hectares of grape vines growing. However, upon arriving at the Augrabie Falls [1200km] and seeing its roaring watery enormity (not in any way sucked dry irrigation) you were suitably impressed. You tried hiking along the cliff edge up to the waterfall but the sun stopped you several times, forcing shade breaks upon you. In the shade there was a family of Rock Dassies - a ratty-looking genetically-close relative of the elephant - some birds, and some Augrabie Flat lizards - jumpy little lizzards, colourful males and grey females, endemic to the falls. During an especially long shade break some of the lizards took a liking to Meike's feet, which proved too tickly to stand. Moving on to see more of the falls up close didn't last long due to dizzying heat, so you both escaped back to camp and poured water over your heads. So much water and wine in the middle of a desert was rather odd, but very enjoyable that evening after the dry day driving and the heated hike. The only problem was how fast the wine (or rather beer) acted in the heat. especially bad for another evening walk along the cliff too see sunset, sit on the edge and rehydrate. Your last good idea of the day was to pile the second tent's mattress on top of the first for a more comfortable, but again windy, night's sleep. The next morning there were cheeky camp-raiding monkeys running amok once again - great breakfast entertainment!

The next destination was Ai-Ais Camp in the Fish River Canyon National Park in Namibia. The day began with a signless dirt road adventure (GPS is gold) where you passed some very old Quiver trees - grown-up Aloe Vera plants, about 200 years - and some Sociable Weaver bird nests. Groups of Quiver trees are so rare (according to the travel guide) that people pay entry to see them, be here at the roadside was a small forrest of them. One social weaver nest was so developed that is consumed an entire Quiver tree. The road was not especially flat nor especially cleared of rocks, deep tyre tracks or sand drifts. You could get up to 80 km/h before things got hairy, and then - surprise! - you were driving through another car's dust cloud and were basically blind. At least they were making an effort to keep their roads usable, assuming everyone drives a high-clearance 4x4. Eventually you came to the Orange River bridge crossing, the boarder into Namibia. You showed some passparts and papers and in exchange they noted your camera equipment and wished you a nice day. It was not a traffic-friendly bridge, being juuuust wide enough for the 4x4, but it got you into Namibia alright. On the Namibian side there were quite a few overheated and lazy looking boarder officers lying under an awning and a policeman checking another car's boot contents. Luckily you had your own pens for all the form filling because they had none (cutbacks?) in the office. You had passports stamped and then let the friendly policeman outside look in your boot (ultra diligently lifting the spare mattress for three seconds before giving the all clear nod); he noted that our registration sticker needed to be on the left side and that we needed a ZA (South Africa) sticker on the back to avoid a potential fine lest we meet traffic police. You continued on you way and after another hundred km of unchanging landscape and three other cars, you had an apples and photography break by a particularly large Sociable Weaver colony. This series of nests looked heavy enough to take down normal tree; perhaps these trees have co-evolved to cope with 100+ birds living on a single branch. Here one had fallen under it's own weight. You also found a spoon.

Your last stop before the camp was in Karasburg for money, petrol and water, where you were asked for sandwiches by some kids as you came back from shopping. You eventually made it to the long windy downhill road into the Ai-Ais Camp, passing a few No Offroad! signs and some very brave-looking 4x4 tracks over idiotically rough terrain. At the bottom of the canyon [1570km] lay a very pretty village of thatched hotel rooms and amenity blocks, and a huge outdoor pool. The whole place was very green but not for lack of effort, as the sprinklers were running non-stop. The fancy-looking hotel had a fancy indoor hotspring which was a little hot for some. The outdoor pool was no better: the whole damn place being a hot springs resort slipped you mind when you ran over the searing hot pool tiles under the scorching hot sun to the water and were there met with a challenging 40 degrees. If that was not enough, there was also a 65 degree Danger, do not enter! hotspring there too. There was no escaping the heat. For dinner was ostrich kebabs with hot pickles on rice and mango sauce. This was the first night you weren't scarred of being blown off the car roof by desert winds... In stead, you were woken up by strange animal noises and torchlights during the night.

The animal noises turned out to be wild horses neighing by the river beside the camp. By morning light you could see about six of them eating reed stems. You decided to take advantage of the less-extreme morning UV and have a short hike up the dry canyon riverbed. When it did flow it must have been an almighty torrent of water, the dam being 140 meters wide. Today it was just a monkey family playground with little more than a puddle of murky water in front of it. Continuing up-river there were some skittish Klipspringer, who made an escape up the cliffs jumping from one unstable-looking rock to the next with unbelievable speed. You hiked for a bit longer until the heat won and made you stop in the shade of the cliffs. The last things clinging to life in the few centermeters of remaining water were some little crabs in shells. You wondered how anything can sustain itself in summer during times when all the puddles dry up. You tried out your fancy new macro lens on a few little things and came back to camp at twenty past ten in the morning with a sunburn, even though you wore a hat and long sleeve shirt, and had a beer. The rest of the day was doing laundry (carrying basins of water back and forth between the car and the bathrooms) and lazying by the hot outdoor pool (get wet, sit in shade, try to enjoy hot breeze, pooed on by birds in tree). You tried checking the tyre pressure with the compressor bundled with the camping gear but the damn thing had a blown fuse. Alfoil fixed it temporarily for thirty seconds. This was a problem for later, somewhere it was not so hot. 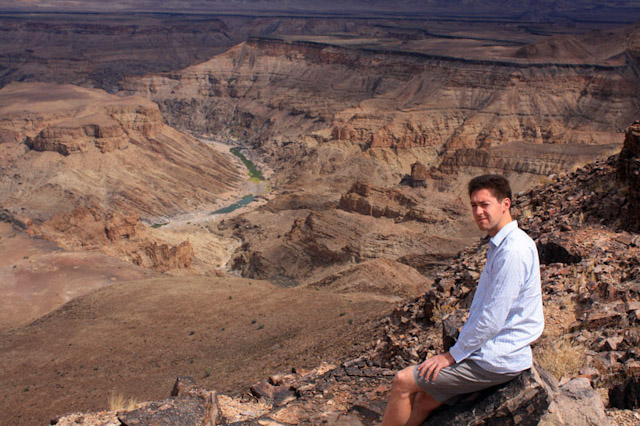 The Ai-Ais Camp was the end of an 85km hike through the canyon (congratulations, you finished certificates available in the gift shop), so the next day drove your car along more dirt roads to see the other end. The view was spectacular from the viewpoint where the trail descended into the windy canyon. In every direction the landscape was endlessly vast and mountainous. The roads were also breath-taking, but in a less-positive way - avoiding big pointy rocks was folly and you bounced so much you thought the wheels would burst or the axle break at any moment. On one small walking trail there was a rather photo-happy Agama (not a chameleon, unlike the Frenchy tourists told you) posing for you at every angle with the lens almost touching his nose. Continuing on, spotting an old mud house and your first water-carrying train on this continent, you drove to the unofficial Quiver tree forrest near Keetmanskoop where you tried recreating a postcard photo you saw earlier (nailed it!). On the way out a scruffy bloke in a red baseball cap informed you that viewing the trees and interesting scrap metal art was not free, and thanked us for our 25 Rand support. Was worth it. In Keetmanskoop you stopped again for food and to be pestered by a persistent black kid in a green beanie wanting to watch the car for 10 Rand. Now this had happened a few times you were getting used to it. He tried the it's really hot today (to be standing in the sun watching cars) line, but Meike bargained him down to five. A cold drink would have probably worked too, but you were feeling somehow ripped off - just being white should not mean pester me for money. If it didn't work he'd probably not bother.

After a long day's driving over rough roads (and some asphalt for the first time in a while), you both made it to Klein Aus Vista Camp [2101km]. It was a simple but lovely looking place a little off the road over a train line in a valley. Reception was welcoming but had no idea what you were talking about (the feeling was mutual) when you asked about your 'Photo Permit' for the ghost town they were meant to have received. After finding camp you decided to give reception time for find the permit and to do the Sunset Trail Hike. With the late afternoon sunlight everything was super colourful. The sky was a strong blue background for the small groups of whispy clouds stroked upon it, and the rocks burnt hot red below. There were some more Sociable Weaver nests dominating the right side of the host tree and a large wall of quartz begging to be climbed on the walk too. Back to reception there told us they couldn't find the photo permit but mumbled some incomprehensible mashup of languages and gave it to us five minutes later. You sat at your camp under the big tree listening to the helicopter bugs and starring at the stars. It was a cold night, the first night for sleeping bags.